At the edge of the Peloponnese, where the last piece of rock touches the Ionian sea from the secret paths of water, come the whispers of the great sea, the one that the Greek Nobel prize winner Odysseas Elitis, the poet of light, gave melody…

Welcome to Messinia, the place Pausanias called Delightful land; land of hospitality, fruit, and light. The sun rises from the peaks of Taygetos and illuminates the past and present of this land with the longest, warmest summers and its beautiful sea.

Welcome to Messinia, the place where ancient times and history are adorned by natural beauties. Explore and wander around the antiquities that picture its glorious past.

Get to know Ithomi, Pylos, the palace of King Nestor, Methoni, Koroni, Kalamata and Kyparissia, the beautiful beaches of Verga and Mikri Mantineia, Avia and Kitries. Enjoy the coasts and beaches, the endless blue crystal clear seas. Visit the wetlands of Gialova with its rare species of birds. Take the road southeast of Kalamata and visit Kardamili with its towers and then Stoupa, Agios Nikolaos  the choice is endless

So, Welcome to Messinia, which combines the past and present in the most harmonic way. Messinia of olive groves and vineyards  of sun and sea  of long warm summers.

CASTLES
The castles of Messinia are an important cultural chapter. Built primarily to serve defensive purposes, they are located in remarkable sites around the county. Most were built by the Franks in locations previously used by the ancient Greeks and Byzantines. In their crossing pass the Venetians repaired, enhanced and
maintained them for defence reasons. Today the castles of Messinia are more than castles of the past.
Easily visited, they are a testament to the areas history.

KORONI CASTLE
6th or 7th century AD) is one of the finest specimens of Venetian fortress architecture, and is one of the few castles where people still have their homes and churches. Noteworthy are the churches of Agia Sophia and St. Charalambous – an old Catholic church which the Turks turned into a mosque and is now an
Orthodox church. 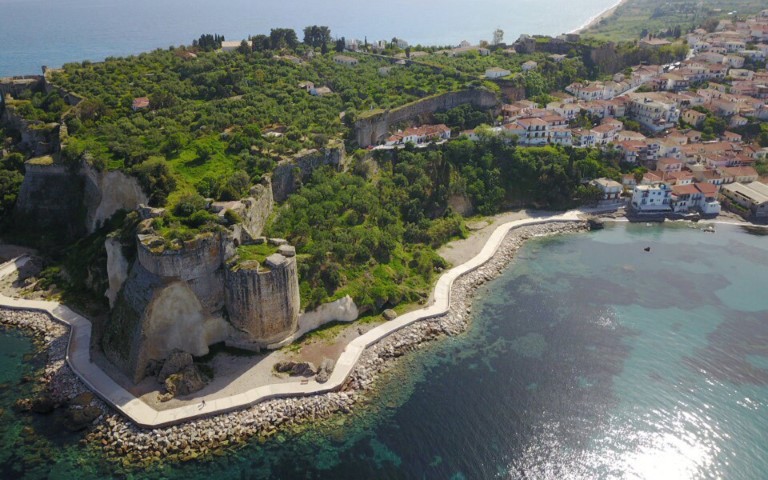 METHONI CASTLE
Was one of the major commercial and shipping centres in medieval times of the Mediterranean. Its castle is irrefutable evidence of the towns wealth and power, built in the 7th century on a rocky promontory which was used as a defensive fortress of the Byzantines (395 AD – 1204 AD). In the northern part of the
fortified citadel many important buildings have been found, including ruins of houses, two Turkish baths, the Byzantine church of Agia Sophia, the Church of Transfiguration, several cisterns and also the buried remains of British prisoners of war from World War II. Pylos hosts two castles, and Neokastro and the Paleokastro. Paleokastro or Palionavarino, was built by the Franks in 1278, it has a rectangular shape with many square and round towers. Near the castle is Nestor’s cave which is mentioned by Pausanias, according to tradition this is where Hermes hid the cows which were stolen from Apollo and also, again according to legend, the cave that Nileas and his son Nestor used as a stable . Neokastro built in 1573 by the Ottomans is at the entrance of the natural bay of Navarino and
consists of a upper and lower castle. The hexagonal shaped citadel is the main characteristic of the upper castle. The lower castle, which is the largest, consists of two square bastions (the western and northern). Inside the castle there is a Turkish aqueduct and the ruins of the Gothic Church of the Transfiguration. The
church was built by the Franks, and then turned into a mosque by the Turks and now serves as an Orthodox Church. It should also be noted that the Greek Centre for Underwater Archaeology operates from the castle. The capital of the Messinia is dominated by the castle of Princess Izabo. Built by Geoffrey Villehardouin (13th century) it was in the possession of Mystra from 1408 to 1430. It consists of two defensive precincts which are its two defensive lines, the outer enclosure includes the fortification of the slope to the east and an inner fortress.
A tour of the castles of Messinia must mention the castles of Zarnata in Meligala. Built by the Franks, large sections of walls and a large square tower remain today, the castle Talkof Mila (built in 1201 to protect the residents of the area and control the mountain passes to Arcadia), the castle of Androusa (the most
important in Moria in the Middle Ages), the castle of Lefktrou on the outskirts of Stoupa and the Castle of the Giants in Kyparissia located in the heart of the city’s protected Upper Town. 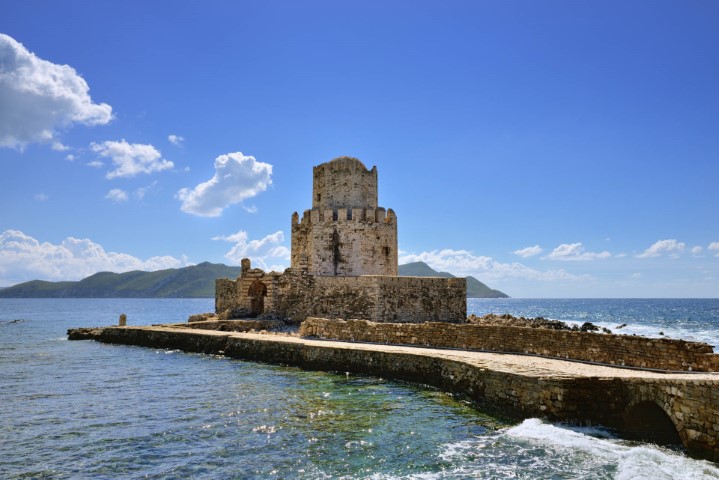